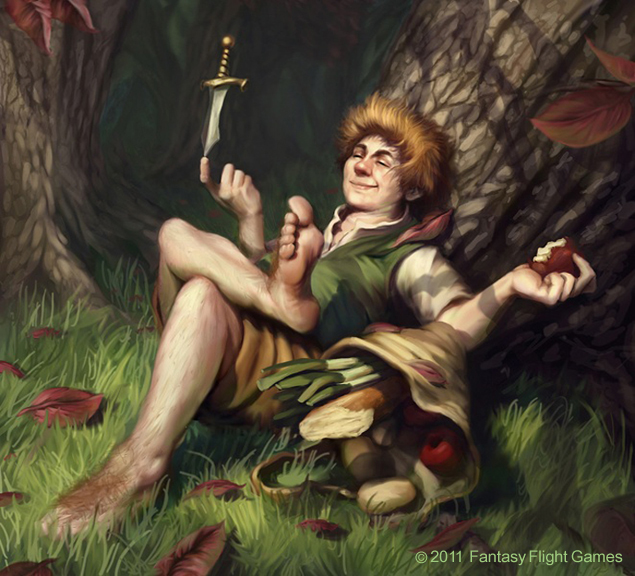 “There must be someone with intelligence in the party”
“Then you certainly will not be chosen, Peregrin Took!”
― Pippin and Gandalf,The Fellowship of the Ring, The Ring Goes South

Peregrin 'Pippin' Took (Third Age 2990 - at least Fourth Age 63; 1390 - 1484 in Shire-reckoning, reaching at least 94-years-old[2]) was one of the Hobbits in the Fellowship of the Ring. He was the youngest of the Company, being in his tweens, but grew up quickly and eventually became a Knight of Gondor. Elrond, at least, seemed to doubt his capability for the quest, but Pippin proved to be a loyal and courageous friend.

He was born in the Third Age 2990 (1390 in Shire Reckoning) to Paladin Took and Eglantine Banks, making him a great-great-grandson of The Old Took. Pippin became Thain in later years, and his father inherited the title in S.R. 1415 from Ferumbras Took III when he died without an heir. Pippin had three older sisters, Pearl Took, Pimpernel Took, and Pervinca Took.

Through his father, Pippin was a first cousin of Merry (the future Master of Buckland), the second-cousin once-removed of Frodo, and the first-cousin twice-removed of Bilbo. He was not blood-related to Sam, but Pippin's son Faramir married Sam's daughter Goldilocks in 1463.

Fellowship of the Ring

As one of the Conspirators, he discovered the truth behind Frodo's mysterious behaviour and left Hobbiton with his friend Samwise Gamgee to Buckland. During the travel, they encountered Black Riders who were turned away by a company of Elves led by Gildor.

In Buckland, they were joined by his kinsman Meriadoc Brandybuck and Fredegar Bolger. It was there that Frodo learned about his friends' “conspiracy” and that they did not intend to let him leave The Shire without them. They left the Shire to meet Gandalf in Bree. Pippin's enthusiasm to accompany Frodo is the result of his adventurous 'Tookish' nature as well as his loyalty and friendship to his cousin.

The stuffiness and eeriness of The Old Forest made Pippin the most uncomfortable of the four Hobbits with him becoming more and more suspicious of the intentions of the Forest; Pippin was, however, right to be suspicious as he was trapped by Old Man Willow before being rescued by Tom Bombadil. On the way to Bree, from Tom Bombadil's house, Pippin again fell into misfortune as he was trapped by a Barrow-wight on the Barrow-downs.

Whilst at The Prancing Pony Pippin began to recklessly tell the story of Bilbo's birthday and subsequent disappearance. In order to prevent information about the Ring being revealed, Frodo started to sing - during the song Frodo fell from the table and the Ring slipped upon his finger. As a result, The Prancing Pony was attacked by the Nazgûl during the night, but the four Hobbits were unharmed thanks to the mysterious Ranger, Strider.

When Pippin finally arrived at Rivendell he was concerned that he and Merry would be left behind whilst both Sam and Frodo get to go on the Quest. However, his indignant attitude paid off as Gandalf believed that the friendship between Pippin and the other Hobbits would be beneficial to the Quest.

When in Moria, Pippin incurred the wrath of Gandalf on two separate occasions: Pippin annoyed Gandalf with a foolish question while Gandalf was trying to open the West-gate of Moria; and, when inside Moria, Pippin's curiosity got the better of him as he dropped a stone down a well which lead to the the Fellowship hearing the drums in the deep - in doing so Pippin gained the retort, 'Fool of a Took!' from Gandalf.

During the Breaking of the Fellowship, Boromir died defending Merry and Pippin from capture by the Uruk-hai who were taking the Hobbits back to Saruman at Isengard on the mistaken belief that one of them had the Ring. On the journey to Isengard, Pippin displayed intelligence and resourcefulness by cutting his own bonds and leaving his Elven brooch from Lothlórien on the ground for Aragorn to find.

Whilst held captive, Merry and Pippin became aware that the Orc Grishnákh had guessed that they might have the Ring, so they used Grishnákh's greed to untie them and take them away from the other Orcs. When the Rohirrim attacked the Uruk-hai, Grishnákh was killed by a spear and Merry and Pippin were able to escape into Fangorn Forest where they encountered Treebeard and the other Ents.

Merry and Pippin struck up a friendship with Treebeard, telling him about all that had happened on their journey, whilst Treebeard told the two hobbits about the loss of the Entwives(and much more besides). Treebeard decided to call an Entmoot at Derndingle to decide the Ents' next move. While the Entmoot was going on, Pippin and Merry were left in the care of a 'hasty' Ent named Quickbeam who had already decided to go to battle with the Orcs as many of his tree friends had been killed.

Merry and Pippin marched with the Ents to Isengard where the Ents killed the remaining servants of Saruman, filled the Ring of Isengard with water, and kept Saruman hostage in Orthanc. Whilst sitting on their 'field of victory', Merry and Pippin were reunited with Aragorn, Gandalf, Gimli and Legolas with whom they shared some pipe-weed and a meal.

Following Gandalf's confrontation with Saruman, Gríma threw the palantír of Isengard out of the window at Gandalf which Pippin subsequently picked up. After Gandalf took it from him, Pippin remained curious about it, and later remarked to Merry about how he would like to look at it again. Unable to sleep, Pippin was finally overcome by curiosity. He stole the palantír from Gandalf's keeping while he slept, but when he looked into it, he was seen by Sauron who mistakenly believed that Pippin and the Ring were with Saruman in Isengard. After a Nazgul flew by on its Fell beast, Gandalf realized that war was coming soon, and he rode immediately for Minas Tirith, taking Pippin with him for safe keeping.

Guard of the Citadel

Upon arriving in Minas Tirith, Pippin went with Gandalf to the Citadel and recounted Boromir's death to Denethor, who was Boromir's father as well as the Ruling Steward. In return for Boromir's untimely death, Pippin decided to pledge his allegiance to the grieving Steward and so became a Guard of the Citadel. Pippin befriended Beregond, of the Third Company of the Citadel, who showed him 'round the city and told him the secret passwords and ways of the city, and became good friends with Beregond's son Bergil.

Denethor was amused with the Hobbit's manners, especially the way he spoke to him in a very informal and personalized familiar language, as with a close friend or social equal, since the Hobbitish dialect lacked formal forms. Denethor's servants were astonished to this view, and probably gave strength to the rumor that Pippin was of very high social rank within his own country, and soon a wild rumor circulated, that the 'Ernil i Pheriannath' had promised 5,000 Hobbits to the defense of the city.

During the Siege of Gondor, Pippin was instrumental in saving Faramir's life. After Faramir had returned from battle, he was badly wounded and suffering from the Black Breath; Denethor looked into the palantír of Minas Tirith and saw the full might of Mordor. Believing that Sauron's forces would prevail in battle, Denethor ordered his servants to set a pyre so both he and Faramir could burn alive, but Pippin was able to fetch Gandalf and Beregond who were both able to help save Faramir.

After the Battle of the Pelennor Fields, Pippin found Merry all in a daze - due to Merry's confrontation with the Witch-king of Angmar - and took him to the Houses of Healing where he was healed by Aragorn. Pippin accompanied the forces of Rohan and Gondor to the Black Gate where he participated in the Battle of the Morannon, and saved Beregond's life by slaying a Troll. Pippin was crushed beneath the troll, but he was pulled out by Gimli who recognized his foot.

When Pippin and the other Hobbits returned to The Shire, they were enraged to see what had happened to their peaceful corner of the world. Pippin went off to Tookland to raise up the Tooks in rebellion, and when he returned for the Battle of Bywater he brought 100 strong hobbits with him. Pippin and Merry jointly commanded the Hobbit victory and their names were placed at the top of The Roll commemorating those who fought in the battle.

Pippin and Merry were heroes, and would tell all the other hobbits the stories of their travels to far-off lands. They would often go out abroad wearing their armour (Pippin had remained a Knight of Gondor) and people thought they were lordly - a position likely enforced by their extraordinary height caused by the Ent-draughts (they were at least 4'5'' tall - taller than Bullroarer Took).

In S.R. 1427 (at the age of 37), he married Diamond of Long Cleeve, and they had their only known child together, Faramir, three years later. In S.R. 1434 (at the age of 44) Pippin succeeded his father Paladin by becoming the 32nd Thain of the Shire, and was also made a Counsellor of the North-kingdom by King Elessar.

In S.R. 1436 King Elessar rode north and stayed in Annúminas, and met Pippin, Merry and Sam at the Brandywine Bridge. In S.R. 1452 the King, as a gift, added the Westmarch to The Shire, and in S.R. 1455 Pippin appointed Fastred - son-in-law of Sam - as the first Warden of Westmarch.

As Thain, Pippin collected a library of historical information at Great Smials, especially information relating to Númenor and the heirs of Elendil. It was at Great Smials that The Tale of Years was likely put together, with assistance from Merry.

In S.R. 1484, at the age of 94 and having been Thain for 50 years, Pippin and Merry passed on their possessions and offices to their sons and left The Shire to visit Rohan and Gondor. When they died a few years later their bodies were placed in Rath Dínen; they were later laid beside King Aragorn II following his death in Fourth Age 120 (S.R. 1541). 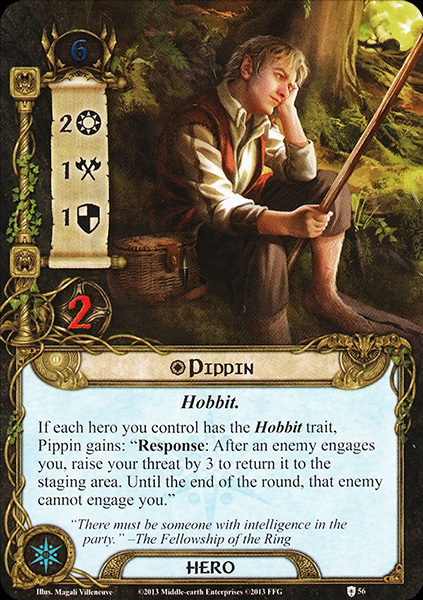 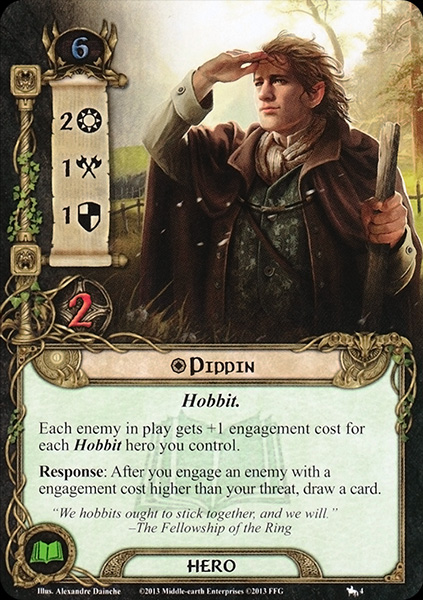 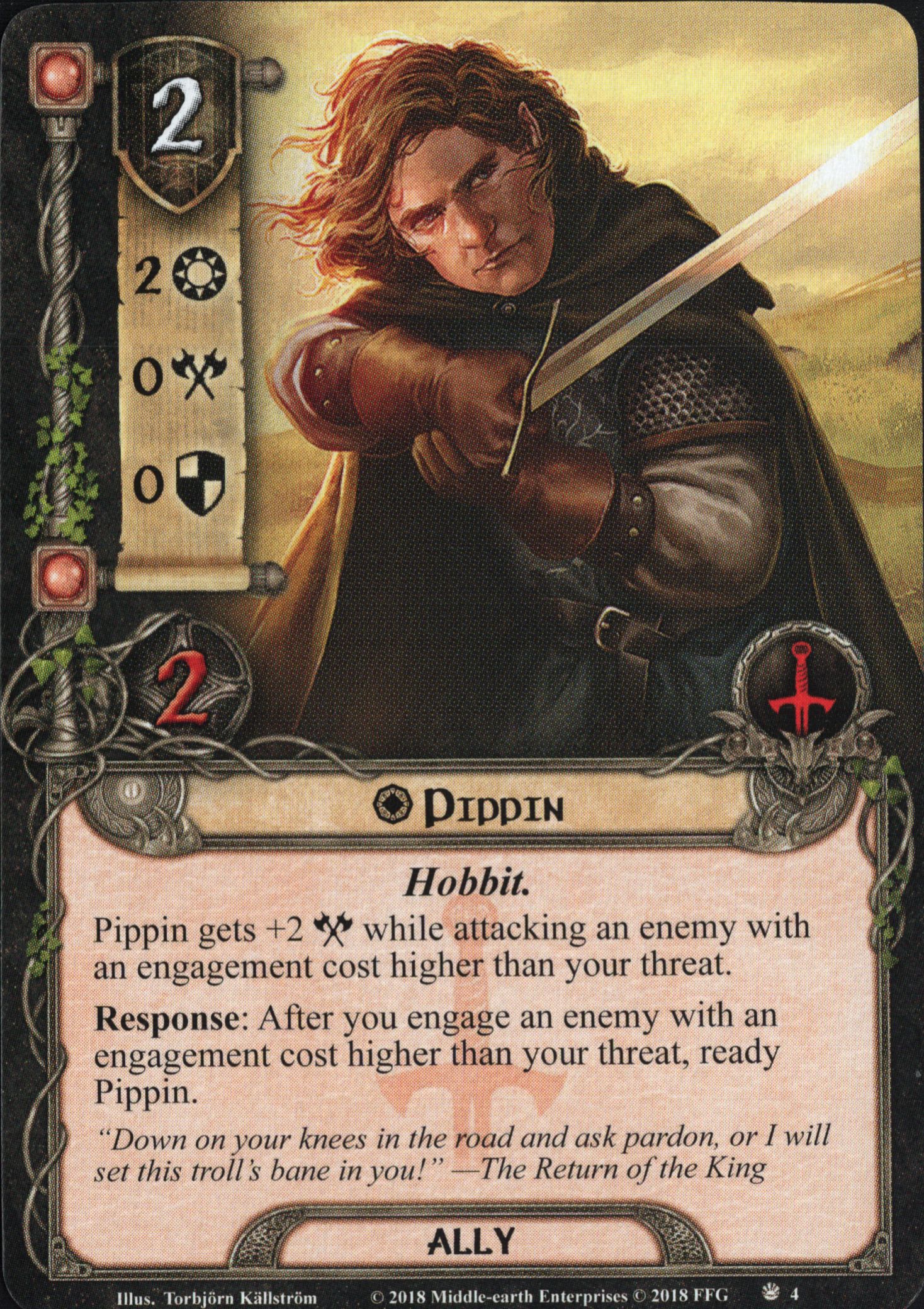