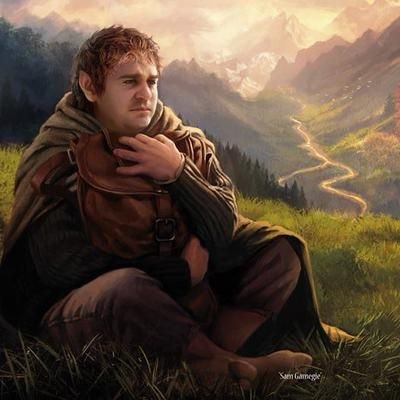 “I am glad you are here with me. Here at the end of all things, Sam”
― Frodo

He lived with his father, Hamfast Gamgee, better known as 'The Gaffer', on Bagshot Row in the Shire, close to Bag End. Sam's mother was Bell Goodchild; he had five siblings: Hamson, Halfred, Daisy, May, and Marigold.

A gardener by trade, Sam seemed to be a simple Hobbit of plain speech. However, his love for Elves, his gift for poetry, and his belief that the world contains greater wonders than most hobbits are aware of (all nurtured by his tutor Bilbo Baggins) set him apart from the beginning.

Sam was one of the 'Conspirators' who were summoned by Merry Brandybuck in order to watch over Frodo Baggins and the Ring inherited by Frodo from Bilbo. Being the closest to Frodo, Sam was their 'chief investigator' who eavesdropped on his talks with Gandalf the Wizard.

On 13 April, when Gandalf revealed to Frodo that Bilbo's ring is Sauron's One Ring, they noticed Sam eavesdropping. Initially suspected as a spy, Sam feigned innocent curiosity. As 'punishment', Sam was made Frodo's first companion on his journey to Bree and Rivendell.[4] Sam and Pippin Took followed Frodo to his new house at Crickhollow where his and the Conspirators' role was revealed. Merry joined the travelers on their way to Bree. They passed through the Old Forest, the Barrow-downs and the Prancing Pony at Bree where they were joined by 'Strider'. Sauron's spies had opened the stables of the inn and all the mounts went loose, therefore before leaving the village, the company purchased a pony from Bill Ferny. Sam loved and tended the animal, and named him Bill, after his owner.

When they reached Rivendell, Sam was beside Frodo's bed while he was recovering from the Morgul-wound he was inflicted on Weathertop. Sam also was caught eavesdropping on the Council of Elrond and insisted that he accompany Frodo on his quest to destroy the Ring.

In Lothlórien, Galadriel gave Sam a box containing earth from her orchard.

After the Breaking of the Fellowship, Sam was the only member of the Fellowship to remain with Frodo. When Gollum joined up with them, Sam remained distrustful of his loyalty to Frodo, and treated him with disdain, and partially (though unintentionally) pushed Gollum to betray Frodo in Shelob's Lair.

After Shelob attacked and seemingly killed Frodo, Sam took the Ring, intending to complete the quest, but upon learning that Frodo still lived, he rescued him from the Tower of Cirith Ungoland returned the Ring to him. Because he held the Ring for a time, he is considered one of the Ring-bearers.

Together, Sam and Frodo crossed Mordor to Mount Doom. Sam himself carrying Frodo up the slope for part of the way. After the destruction of the Ring, both Sam and Frodo were honored by King Elessar for their deeds.

After the War of the Ring, and the Scouring of the Shire, Sam planted saplings in all the places where specially beautiful and beloved trees had been destroyed, and he put a grain of Galadriel's soil at the root of each. He planted a silver nut in the Party Field where the Party Tree had once been, and the nut grew into a Mallorn tree.

He married Rose 'Rosie' Cotton. In honor for restoring the Shire his family was given the name Gardner.

They had thirteen children: Elanor the Fair, Frodo, Rose, Merry, Pippin, Goldilocks, Hamfast, Daisy, Primrose, Bilbo, Ruby, Robin, and Tolman. When Frodo sailed on the White Ship, at the end of the Third Age, Sam inherited Bag End and was entrusted the Red Book of Westmarch.

After Will Whitfoot resigned his post as Mayor of Michel Delving (the largest town in the Shire and the 'unofficial capital'), in Fo.A. 6, Sam was elected Mayor of the Shire for seven consecutive 7-year terms.

After his wife died in Fo.A. 61, Sam entrusted the Red Book to Elanor and, according to her, he went to the Grey Havens to sail across the Sea and be reunited with Frodo in the Undying Lands.

Samwise means 'simple minded' or 'half-minded'. Gamgee is a corruption of the name Gammidgy, a village in the Shire. Both names are presented as translations of the Westron form of Sam's name Banazîr Galbasi (also spelled Banazîr Galpsi) (q.v. for more information).

The Sindarin version of Samwise is Perhael.

J.R.R. Tolkien took the name from Gamgee Tissue, a surgical dressing invented by a 19th century Birmingham surgeon called Joseph Sampson Gamgee. 'Gamgee' became the colloquial name in Birmingham for cotton wool. Here, Tolkien describes why he had chosen that name for his character:

“The choice of Gamgee was primarily directed by alliteration; but I did not invent it. It was caught out of childhood memory, as a comic word or name. It was in fact the name when I was small (in Birmingham) for 'cotton-wool'. (Hence the association of the Gamgees with the Cottons.) I knew nothing of its origin.”
― The Letters of J.R.R. Tolkien

It is possible that Tolkien may have subconsciously recalled Dr. Gamgee (who died in 1886 but is commemorated by a plaque at the Birmingham Medical Institute, only yards from Tolkien's childhood home) but he claimed to be genuinely surprised when, in March 1956, he received a letter from one Sam Gamgee, who had heard that his name was in The Lord of the Rings but had not read the book. Tolkien replied on March 18:

“Dear Mr. Gamgee,
It was very kind of you to write. You can imagine my astonishment when I saw your signature! I can only say, for your comfort, I hope, that the 'Sam Gamgee' of my story is a most heroic character, now widely beloved by many readers, even though his origins are rustic. So that perhaps you will not be displeased at the coincidence of the name of this imaginary character of supposedly many centuries ago being the same as yours.”
― The Letters of J.R.R. Tolkien: Letter 184

He proceeded to send Mr Gamgee a signed copy of all three volumes of the book. However, the incident sparked a nagging worry in Tolkien's mind, as he recorded in his journal:

“For some time I lived in fear of receiving a letter signed 'S. Gollum'. That would have been more difficult to deal with.”
― J.R.R. Tolkien: A Biography

Sam Gamgee is by many regarded as the 'true hero' of Tolkien's story. Tolkien himself expressed this view in one of his letters: Sam is referred to as the 'chief hero', and special emphasis is placed on Sam's 'rustic love' for Rosie.[6] The quest to destroy the Ring only succeeds because of Sam, who repeatedly saves Frodo from disaster (such as rescuing him at Cirith Ungol and carrying him up Mount Doom). He was one of only two Ring-bearers strong enough to surrender the Ring voluntarily.

The relationship between Frodo and Sam is, in many respects, at the center of The Lord of the Rings. To the modern reader, it seems archaic, as it is extremely class-oriented. Sam's humbleness and 'plain speaking' is frequently emphasised in contrast to Frodo's 'gentility', and he often shows deference to Frodo, calling him 'Mister Frodo' or 'Master'. At the same time, a strong bond of love and trust grows between them, portrayed most poignantly during the events of Cirith Ungol, where Sam vows to return to his (apparently) dead master, to be reunited with Frodo in death.

Tolkienists regard Sam as Frodo's batman. In the British Army, a batman was an orderly who acted as the personal servant of an officer. It was a role with which Tolkien (who served as an Army officer in the First World War) would have been extremely familiar. Sam undertakes all of the typical roles of a batman — he runs errands for Frodo, he cooks, he transports him (or at least carries him), and he carries his luggage. Tolkien confirmed this interpretation when he wrote in a private letter that:

“My Sam Gamgee is indeed a reflexion of the English soldier, of the privates and batmen I knew in the 1914 war, and recognized as so far superior to myself”
― The Letters of J.R.R. Tolkien

Compare to the relation between Don Quixote and his squire Sancho Panza, and the gradual 'Quixotization' of Sancho.

The One Ring Lórien Rope 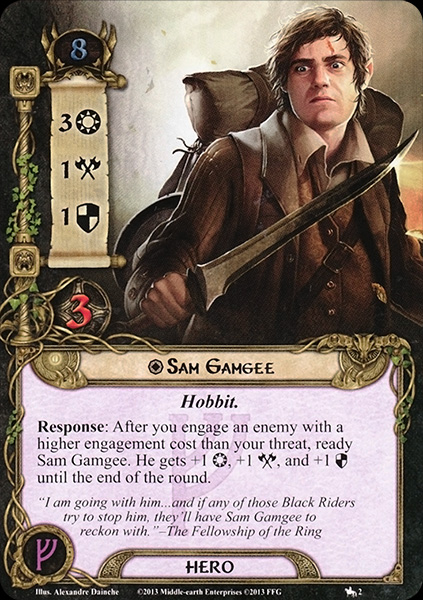 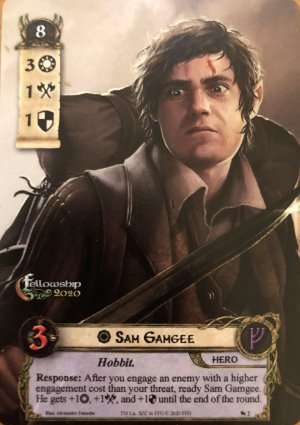 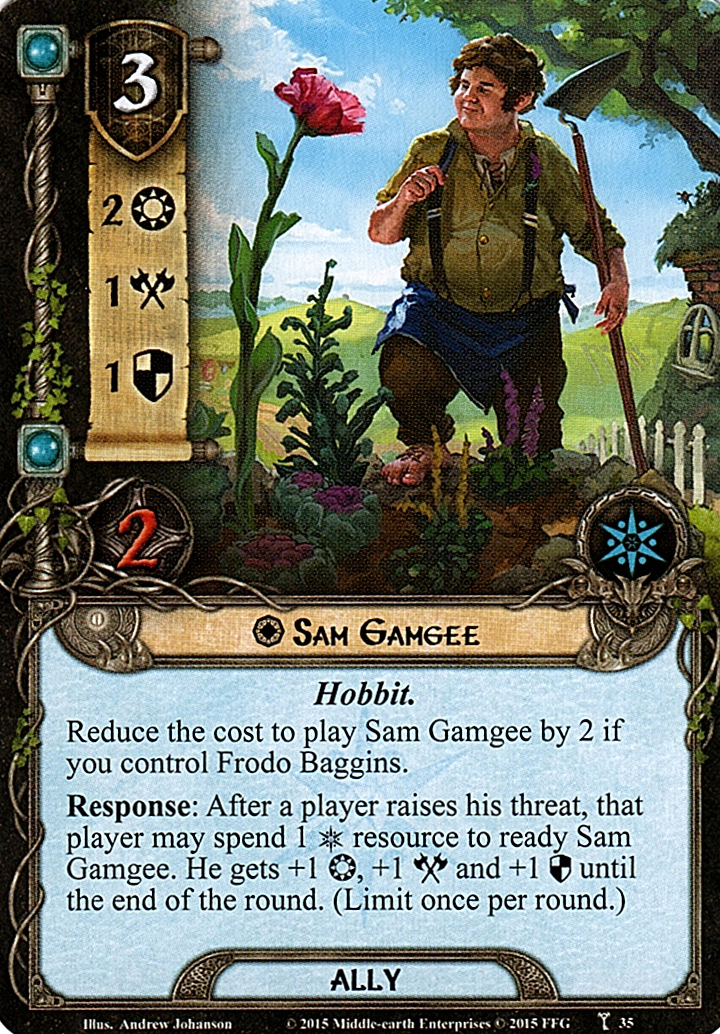