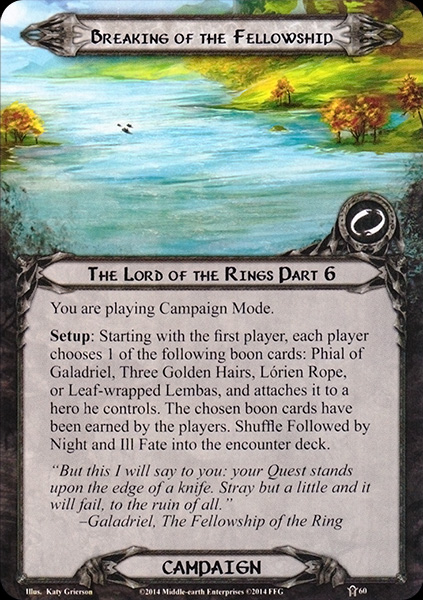 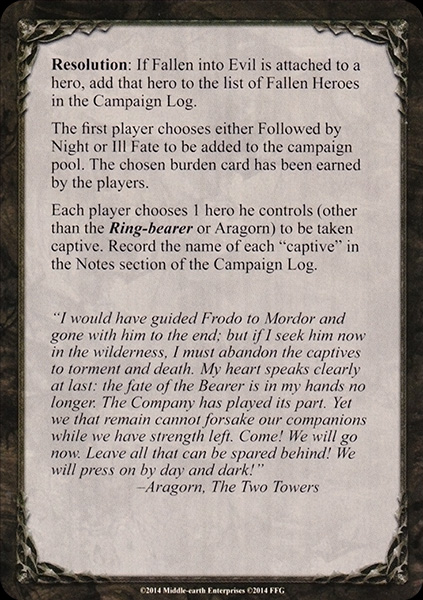 You are playing in Campaign Mode.

Setup: Starting with the first player, each player chooses 1 of the following boon cards: Phial of Galadriel, Three Golden Hairs, Lórien Rope, or Leaf-wrapped Lembas, and attaches it to a hero he controls. The chosen boon cards have been earned by the players. Shuffle Followed by Night and Ill Fate into the encounter deck.


"But this I will say to you: your Quest stands upon the edge of a knife. Stray but a little and it will fail, to the ruin of all." -Galadriel, The Fellowship of the Ring

Resolution: If Fallen into Evil is attached to a hero, add that hero to the list of Fallen Heroes in the Campaign Log.

The first player chooses either Followed by Night or Ill Fate to be added to the campaign pool. The chosen burden card has been earned by the players.

Each player chooses 1 hero he controls (other than the Ring-bearer or Aragorn) to be taken captive. Record the name of each "captive" in the Notes section of the Campaign Log.

I would have guided Frodo to Mordor and gone with him to the end; but if I seek him now in the wilderness, I must abandon the captives to torment and death. My heart speaks clearly at last: the fate of the Bearer is in my hands no longer. The Company has played its part. Yet we that remain cannot forsake our companions while we have strength left. Come! We will go now. Leave all that can be spared behind! We will press on by day and dark! –Aragorn, The Two Towers