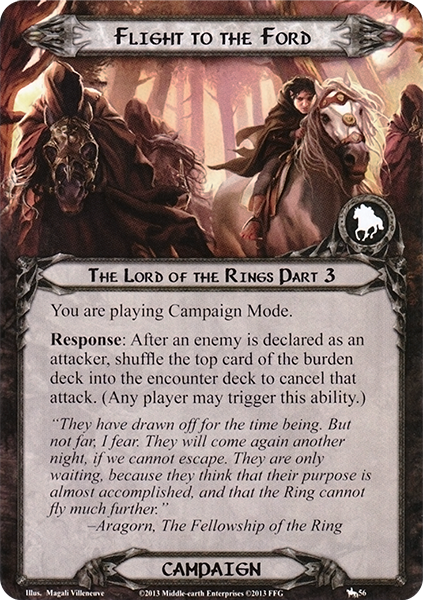 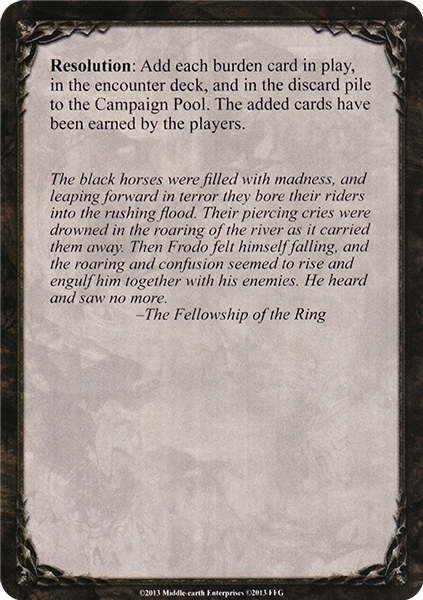 You are playing Campaign Mode.

Response: After an ememy is declared as an attacker, shuffle the top card of the burden deck into the encounter deck to cancel that attack. (Any player may trigger this ability.)


"They have drawn off for the time being. But not far, I fear. They will come again another night, if we cannot escape. They are only waiting, because they think that their purpose is almost accomplished, and that the Ring cannot fly much further."
-Aragorn, The Fellowship of the Ring

Resolution: Add each burder card in play, in the encounter deck, and in the discard pile to the Campaign Pool. The added cards have been earned by the players.

The black horses were filled with madness, and leaping forward in terror they bore their riders into the rushing flood. Their piercing cries were drowned in the roaring of the river as it carried them away. Then Frodo felt himself falling, and the roaring and confusion seemed to rise and engulf him together with his enemies. He heard and saw no more.
–The Fellowship of the Ring