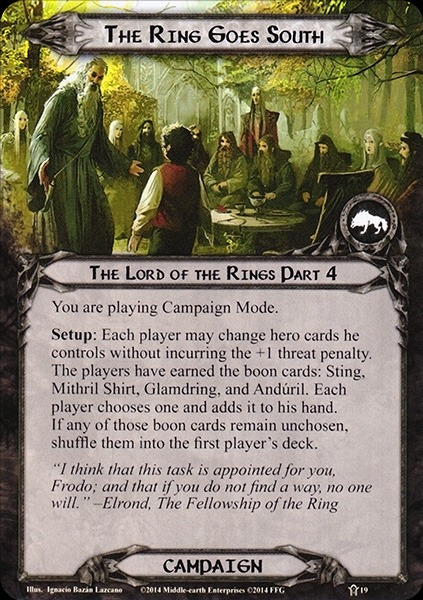 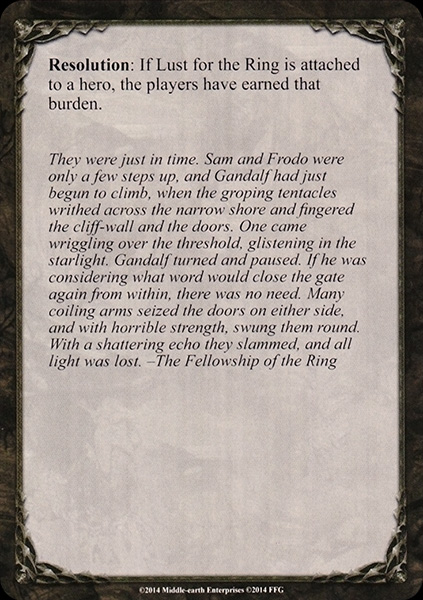 You are playing in Campaign Mode.

Setup: Each player may change hero cards he controls without incurring the +1 threat penalty. The players have earned the boon cards: Sting, Mithril Shirt, Glamdring, and Andúril. Each player chooses one and adds it to his hand. If any of those boon cards remain unchosen, shuffle them into the first player's deck.


"I think that this task is appointed for you, Frodo; and that if you do not find a way, no one will." -Elrond, The Fellowship of the Ring

Resolution: If Lust for the Ring is attached to a hero, the players have earned that burden.

They were just in time. Sam and Frodo were only a few steps up, and Gandalf had just begun to climb, when the groping tentacles writhed across the narrow shore and fingered the cliff–wall and the doors. One came wriggling over the threshold, glistening in the starlight. Gandalf turned and paused. If he was considering what word would close the gate again from within, there was no need. Many coiling arms seized the doors on either side, and with horrible strength, swung them round. With a shattering echo they slammed, and all light was lost. –The Fellowship of the Ring