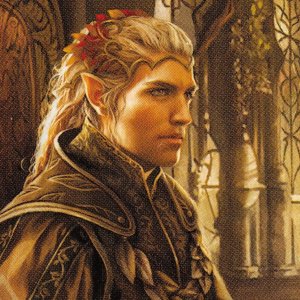 “In a great hall with pillars hewn out of the living stone sat the Elvenking on a chair of carven wood. On his head was a crown of berries and red leaves, for the autumn was come again. In the spring he wore a crown of woodland flowers. In his hand he held a carven staff of oak.”
–The Hobbit, Barrels Out of Bond

Thranduil, the Elvenking, was a Sindarin Elf of Doriath and King of the Silvan Elves of Mirkwood in the Woodland Realm. Thranduil was son of Oropher and father of Legolas.

Thranduil was one of the Iathrim who spent his early life in Doriath. Following the destruction of Beleriand and the War of Wrath, most of the Noldorin exiles and remnants of the Sindar retreated to Lindon. The Valar reinvited these Elves to Aman, but Thranduil, among many others, was unwilling and remained in Lindon.

Many of the Sindar left Lindon and travelled eastward, before the building of the Barad-dûr in S.A. 1000. Thranduil is first recorded in this event, when he and his father, Oropher, arrived, in S.A. 750, in Greenwood the Great. Oropher was taken by the Silvan Elves as their lord and founded the Woodland Realm.

The Elves of Mirkwood joined the Last Alliance and in S.A. 3434, Thranduil followed his father and numerous lightly armed Elves in the War of the Last Alliance. In the Battle of Dagorlad, Oropher was slain in the first assault upon Mordor, “rushing forward at the head of his most doughty warriors before Gil-galad had given the signal for the advance.” His son survived, but over the course of the war, two-thirds of his people had perished. After the Siege of Barad-dûr in S.A. 3441, when Sauron was defeated, Thranduil led the remainder of his people north back to the Woodland Realm, where he was crowned king.

Upon the return of Sauron - disguised as the Necromancer - in around T.A. 1050, southern Greenwood became increasingly dangerous; evil creatures such as the great spiders came to dwell in it and the forest soon came to be known as “Mirkwood”. Thranduil's folk retreated to the north of the forest, where they established themselves near the Forest River. Thranduil had his halls delved underground, fashioned partly in memory (it was said) of the mighty, but long-lost, Menegroth of Doriath.[note 1][6][1] In north-eastern Mirkwood, they were near the Forest River behind great, stone gates.

In T.A. 2941, Thranduil and some of his folk were feasting in the woods when they were repeatedly disturbed by a party of Dwarves. After the third disturbance, the Elves captured Thorin who refused to reveal to Thranduil the reason for their journey through Mirkwood. Following their battle with the spiders, the rest of the company was also captured by the Elves. Following their repeated failure to explain their presence in Mirkwood, Thranduil placed all the Dwarves under lock and key. They escaped, however, with the aid of a Hobbit, Bilbo Baggins. Baggins had evaded capture by Thranduil's people through the use of his magic ring.

After the Dwarves' escape, Thranduil received word of what had transpired from the Raft-elves who returned up the Forest River. Thus he was now aware of the Dwarves' quest. Upon learning this, he stated, “no treasure will come back through Mirkwood without my having something to say in the matter.” He believed the Dwarves were incapable of slaying the Dragon. However, he soon heard from his own messengers (including the birds) that the Dragon Smaug had been felled (and the Lake-town was destroyed).

Thranduil was aware that Smaug had a massive hoard of treasure. Believing the Dwarves to be dead, and desiring a share of the treasure, he set out towards the Lonely Mountain with a company of Elves. On the way, they met messengers from Bard who was seeking aid for his destroyed town. Thranduil gave aid to these Men, as the Lake-men had been friends with the Wood-elves, and left elven craftsmen to aid in the labour and building of huts to fortify them against the coming winter.[9] Together, Thranduil and Bard led their forces towards the Lonely Mountain and were surprised when they found out that the Dwarves not only survived Smaug's attacks, but had taken possession of the Mountain and its treasures; the King under the Mountain had returned.

As Thorin refused to give away any part of the treasure for Dale and Lake-town under armed threat, Thranduil and Bard besieged the mountain. After a few days, a Dwarvish host led by Dáin II Ironfoot, who had been summoned by raven messengers, approached to support Thorin. But, two evenings before his arrival, Bilbo came before Thranduil and Bard bringing the Arkenstone, a great jewel that Thorin valued above all, in order to make Thorin open to negotiations again. Thranduil was impressed by Bilbo and urged him to remain in order to avoid Thorin's wrath, but Bilbo returned to his friends. The next morning Bard and Thranduil entered into negotiations with an angered Thorin, who agreed to pay one-fourteenth share of the treasure in exchange for the stone. Thranduil was reluctant to start a war over gold, but when the forces of Dáin arrived the next day, before the trade had been made for the Arkenstone, the Dwarves proceeded to attack.

At that moment, the Orcs of the Misty Mountains and Grey Mountains under Bolg were using the opportunity to march after the hoard, and he was accompanied by a cloud of great bats. After skirmishing among themselves, under the council of Gandalf, the three commanders agreed that the Goblins were the enemies of all. So the Battle of Five Armies began, “upon one side were the Goblins and the Wild Wolves, and upon the other were Elves and Men and Dwarves.” Thranduil's host was positioned on the southern side of the Mountain, and they were the first to charge. Many Elves and allies were slain and things looked grim when the Eagles and Beorn arrived on the battlefield. They turned the tide and the battle was won.

Thorin died soon after the battle. Thranduil laid Orcrist on Thorin's tomb, where it was said to glow in warning when foes approached.

The victors divided the treasure, with Bard giving Thranduil the emeralds of Girion. When Bilbo and Gandalf bade farewell to Thranduil, Bilbo gave him a necklace of silver and pearls. Thranduil gave the hobbit the title Elf-friend and returned with the remainder of his host to his realm in Mirkwood.

On 21 March, T.A. 3018 Aragorn and Gandalf delivered Gollum as a prisoner to Thranduil; but in June he later escaped. Thranduil sent his son Legolas to Rivendell to inform Elrond, and during the Council of Elrond Legolas was selected as one of the nine members of the Company of the Ring.[11] Another member of the Company was the Dwarf, Gimli, the son of Glóin of Thorin's company, who had previously been imprisoned by Thranduil. The unprecedented friendship between Elf and Dwarf helped to reconcile Thranduil's people and the Dwarves.

On 15 March, T.A. 3019, Sauron's army from Dol Guldur attacked Mirkwood. There was a long battle under the trees and the woods were set on fire, but in the end Thranduil was victorious. In the south, the forces of the Lord and Lady of Galadhrim stormed Dol Guldur and threw down its walls.

On 6 April, the Elvenking met with Lord Celeborn in the midst of Mirkwood and renamed it Eryn Lasgalen, “The Wood of the Greenleaves”. With the forest cleansed and Sauron's forces destroyed, the Woodland Realm was divided. Thranduil received the northern region of the Eryn Lasgalen as far as the Mountains and ruled there into the Fourth Age.

Thranduil lived in atunement with nature, wearing a crown of woodland flowers, or autumn berries and red leaves, according to the season.[12] His banner was green in colour.[13] He loved the forest, though it was dark and dangerous in many parts; and enjoyed hunting and feasting among the trees with his people.[7] He was distrustful of strangers for the most part, although he had business dealings with the men of Lake-town.[12] He was mostly unconcerned with affairs of the world beyond Mirkwood unless a common enemy was shared or for trade with “their kinsfolk in the South, or . . . Men in distant lands.”

Although his concern was primarily for his realm, the memory of the end of the Second Age and what lay outside his borders haunted him:

But there was in Thranduil's heart a still deeper shadow. He had seen the horror of Mordor and could not forget it. If ever he looked south its memory dimmed the light of the Sun, and though he knew that it was now broken and deserted and under the vigilance of the Kings of Men, fear spoke in his heart that it was not conquered for ever; it would arise again.
–J.R.R. Tolkien, Christopher Tolkien (ed.), Unfinished Tales, “The History of Galadriel and Celeborn”, “Appendix B: The Sindarin Princes of the Silvan Elves”

He had a particular fondness for white gems and wanted to acquire more: “if the elf-king had a weakness it was for treasure, especially for silver and white gems; and though his hoard was rich, was eager for more, since he had not yet as great a treasure as other elf-lords of old.” Despite this weakness, he was wise and would not wantonly go to war, risking his people's lives, over treasure. This was evidenced when the Elvenking said, “long will I tarry, ere I begin this war for gold . . . let us hope still for something that will bring reconciliation.”

The name Thranduil means “Vigorous spring” in Sindarin, from tharan “vigorous” and tuil “spring”. Though the name is said to be of Silvan origin, Tolkien's notes on tharan state it was used only in Sindarin. 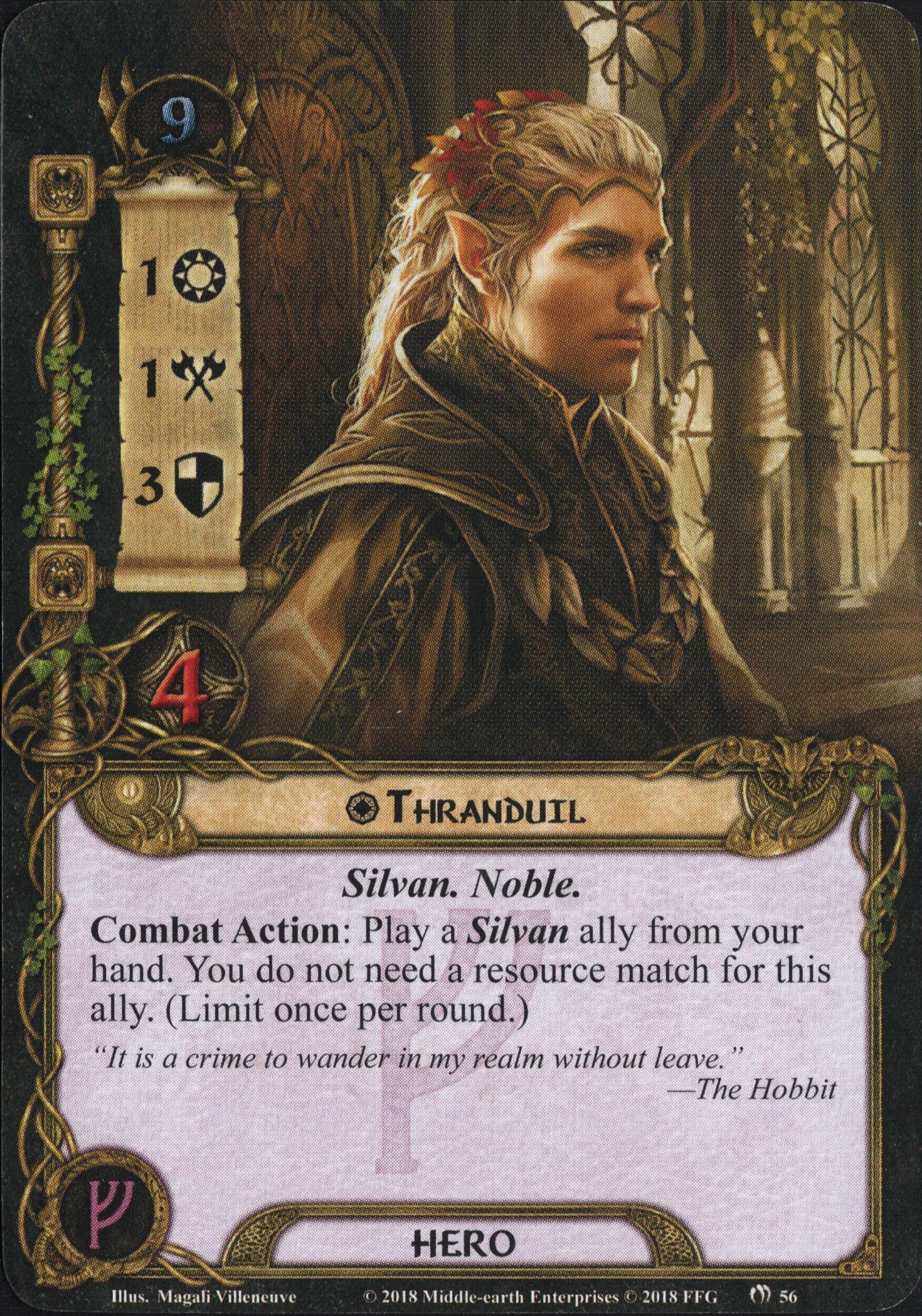